The Holy Mile (the Miglio Sacro)

A mile-long route to discover the treasures of Rione Sanità

The Holy Mile (the Miglio Sacro) is a sacred, one-mile long itinerary, from the tomb of St. Gennaro to his Treasure. This journey of discovery was reopened in 2006 for Naples and Neapolitans, as well as for visitors and tourists from all around the world.

The tour explores Rione Sanità, a district once inhabited by numerous peoples and cultures, from African to Chinese. When crossing the neighborhood today, the mixture of sounds, colours, and faces confirms that diversity is still at home here. The streets preserve memories of coaches with Popes, kings, and cardinals, from more prosperous times. The churches, more than mere prodigious galleries for worship, provide a place of rest, peace and desire for a better life.

To "experience" the Holy Mile means to support the revival of Rione Sanità by affirming its long history and inner chaotic beauty.

Welcome to meeting a place where humanism either dies or becomes humanity! 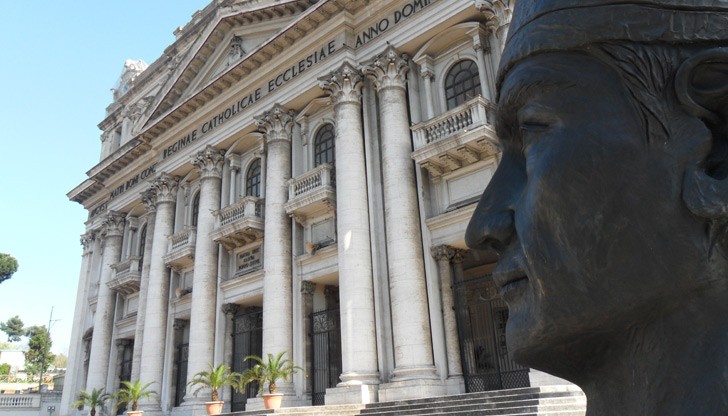 The tour starts from the newest Basilica in the city, built between 1920 and 1960.

The tour starts from the Basilica of Incoronata, from whose garden you can access the Catacombs of San Gennaro.

The Basilica was built as a tribute to the painting of the Madre del Buon Consiglio. The canvas was painted in 1884 and immediately proved to be miraculous: it seems that in the same year it put an end to the cholera epidemic and, in 1906, stopped the ashes of Mount Vesuvius that hit Naples.

Given the large number of pilgrims who visited the canvas, a Basilica to safeguard the painting was built on the model of St. Peter's in Rome. 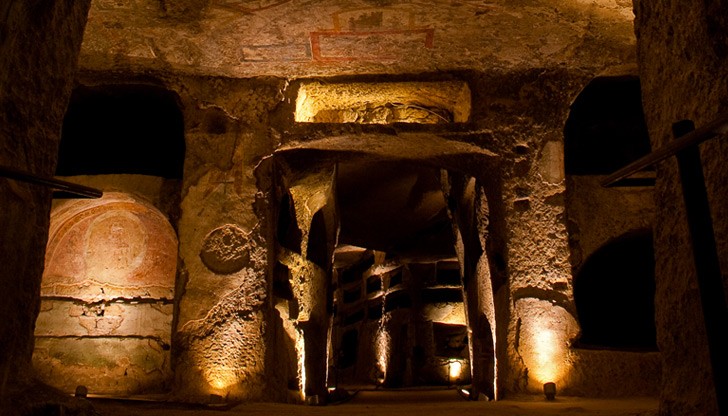 A trip underground through the history of Christianity in Naples.

At a few metres’ distance and a few steps further down, we reach the Catacombs of San Gennaro, where the tomb of the patron saint is located.

The Catacombs of San Gennaro were created from the expansion of a chapel which started during the second century AD, after the deposition of Sant'Agrippino, first patron saint of Naples, and continued with the arrival of San Gennaro.

They consist of two non-overlapping levels and are characterised by open spaces, dug horizontally.

In the Catacombs you will discover the precious mosaics placed on the tombs of the first bishops of Naples, frescoes of ancient Neapolitan families recovered from ruin and special structures built in the tuff. 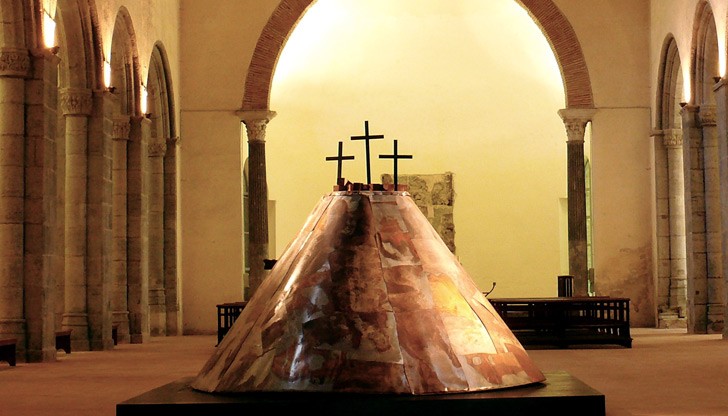 Just outside the exit of the Catacombs, that originally was the access, there is the early Christian basilica built in the fifth century AD.

Like the Catacombs, it was abandoned after the remains of San Gennaro were stolen in the fifth century. In the fifteenth century it was renovated and adapted to the Baroque style. In place of the nearby monastery, a hospital for lepers was built (San Gennaro of the Poor) which later became a hospice for the poor. Despite further renovation in the early twentieth century, which brought it to its original aspect, the Basilica became a store for the nearby hospital.

Since 2008 it has once again become part of the neighbourhood’s life. View map 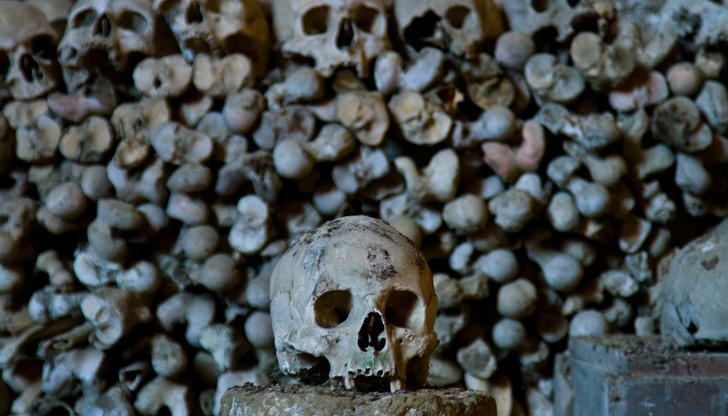 One of the symbols of the devotion of the city of Naples to the dead.

A short walk through the District leads us to the ossuary of Fontanelle. The site was an ancient tuff quarry carved into the Materdei hill which became an ossuary in the mid seventeenth century to house the remains of the victims of the plague and cholera.

It became a place of worship in the late nineteenth century, when some devotees led by Father Gaetano Barbati, arranged the thousands of anonymous bones. Their anonymity pushed the faithful to adopt some of the skulls of the ossuary, the anime pezzentelle (little pauper souls), that were cleaned and placed in glass cases in exchange for protection. View map 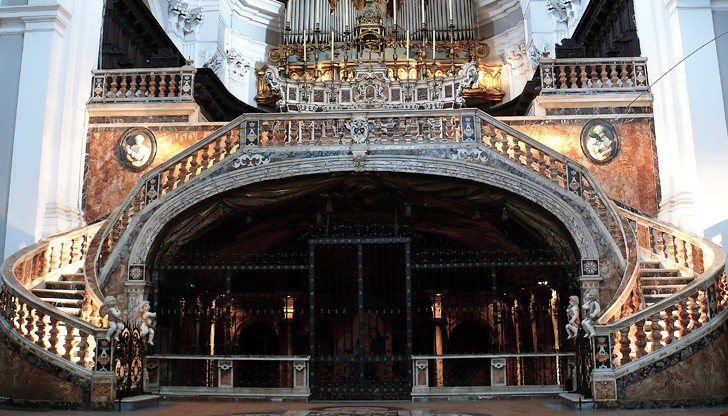 In Rione Sanità (Sanità District), the basilica is known as the Church of St. Vincenzo o’Munacone (the big monk).

Let's go back in the heart of the area, to the Basilica of Santa Maria della Sanità (St. Mary of Sanità), landmark of the district. It is known as the Church of the Monacone because it has the statue of St. Vincenzo Ferreri, a Dominican monk and patron of Health.

The basilica is a veritable museum of Neapolitan painting of the seventeenth century, with valuable paintings, among others, by Luca Giordano and Andrea Vaccaro, and the first Neapolitan representation of Madonna and Child, saved from the Virgins’ Lava in the fifth and sixth centuries AD. View map 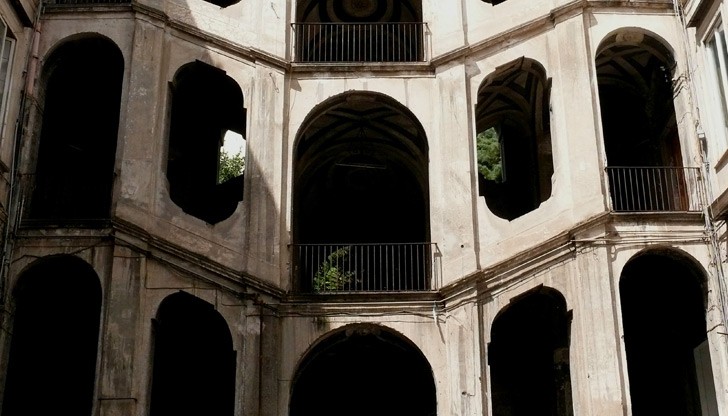 A masterpiece of Neapolitan Baroque, designed by Ferdinando Sanfelice.

We go down again towards the heart of the area to visit the courtyard of this building, designed by the Neapolitan architect at the beginning of the eighteenth century as his private residence. It consists of two bodies joined by the facade, but its main characteristic is the internal hawk-wing staircase with its great dramatic effect.

Perhaps this is why the courtyard was the backdrop to the film Ghosts – Italian Style (original italian title: Questi fantasmi), based on the play by Eduardo De Filippo. View map 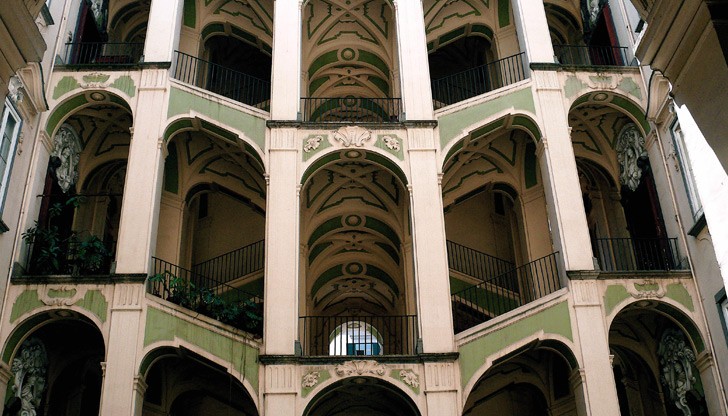 The Baroque originality of the visionary staircase inside.

A few steps away, another of the most famous buildings in Naples. It was commissioned to Ferdinando Sanfelice by the Marquis of Poppano, who unified two buildings received as dowry.

Its main characteristic is the grand hawk-wing staircase, adorned with stucco decorations. It is known as the Palace of the Spaniard because in the nineteenth century it was bought by the Spaniard Tommaso Atienza.

Church of St. Mary of the Virgins 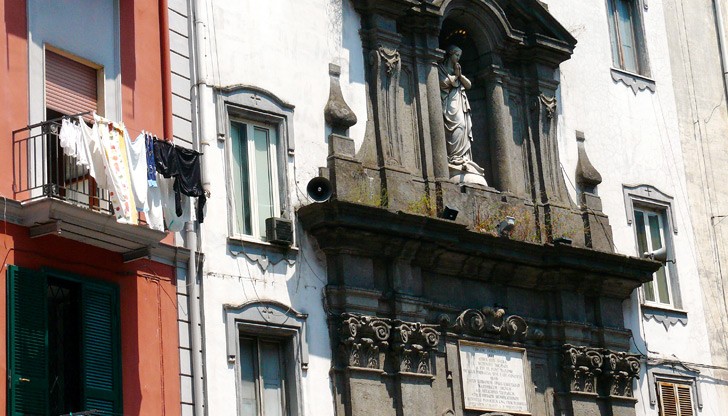 Near Porta San Gennaro you will find one of the monumental churches of Naples.

After just one minute’s walk, we reach the church of Saint Mary of the Virgins, built on an ancient structure (hospital and chapel) in 1326 by the inhabitants of the Borgo dei Vergini (District of the Virgins) and then sold to the Crociferi monks of St. Cletus.

It was almost completely destroyed during the Second World War, but the baptismal font where St. Alphonso Maria de' Liguori was baptised was saved from destruction. View map 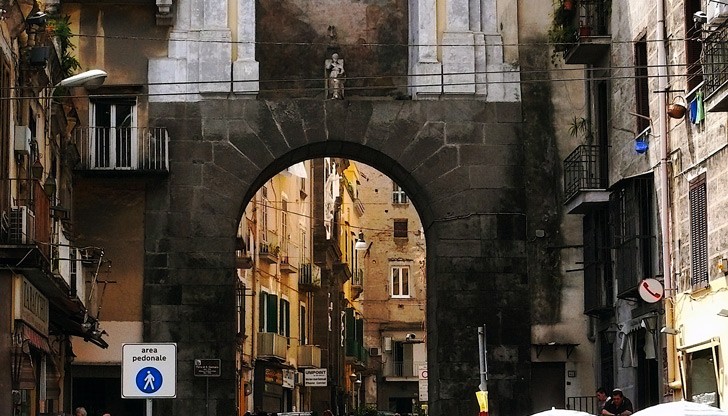 It is the oldest gate of Naples, through which the tufa blocks from the quarries passed.

Our journey ends close to Via Foria, at Porta San Gennaro. The gate was mentioned for the first time in 928 and was the entrance to the city for those coming from the north and necessary passage to go to the Catacombs of San Gennaro.

After the 1656 plague, a frescoed aedicule was added as votive offering, depicting San Gennaro, Santa Rosalia and St. Francis Xavier praying for the end of the epidemic.